The Truth About Fibs

When I was a kid, elementary schools were all about the three R’s: reading, writing, and arithmetic. Even before I learned to spell I knew something was messed up with that. Three R’s? Really? As I understood it, an R word was supposed to start with the letter R. Is affable, or delightful, for that matter, an F word? If so, what’s the big deal about calling someone the F word? I didn’t get it at the time. But I think I do now. 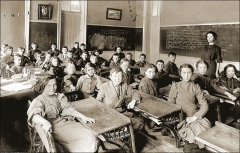 Here’s the deal: it’s okay to make stuff up. It’s okay to say arithmetic is an R word, even though it isn’t. It’s okay to pretend something works, just because you want it to work. Otherwise, there’d be no stories, no fiction, and apparently no writing or arithmetic for school kids. And that would be a bummer, because writing is fun. Why is it fun? Because when you write stories, you get to fabricate. It’s expected, encouraged even.

I avoid nonfiction – reading it – writing it. There’s an

expectation of truth, which I find a bit boring. If I wanted honesty, I’d step on a bathroom
scale – a new one that my wife hadn’t “calibrated” yet.

The three R’s sham taught me to always anticipate an onslaught of falsehoods, to look for
them around every corner, and to embrace them. I guess I’ve grown to accept this fact of life, to enjoy being deceived, and to welcome little fibs as thought-provoking

entertainment. For instance, I’ve heard this is the year the Cleveland Indians will win the
World Series – from the same source I heard it from last year. No doubt next year the same source will be promising a repeat, right? I enjoy hearing and reading these things. What’s the fun of always living in reality?

and that it’s much easier to join the party than to quarrel with it. So, if you want to write a story, just pull up a keyboard and make something up. It won’t necessarily be interesting or entertaining, but go ahead, make something up; you’ve been doing it all your life. I’m talking to you, Homer Simpson.

It wasn’t always this easy to be a writer, though. Can you imagine back in the day, when honesty prevailed and deceit was kept in check by hickory switches and big-boned wives? I pity the writers of long ago. Stories were harder to come by. It took an actual imagination to pen a tale. The writers of yore must have been more dedicated to their craft – much more; they had no laptops or desktops. When they made a mistake,

such as a sentence committed to paper that didn’t quite work, or a perfect chapter composed while unduly-lubricated, they paid for it. Depleting those stores of blood, exacerbating those pools of sweat, and fighting those unending headaches were commonplace afflictions of the pre delete button, spell check, and automated word counter era. They went through a ton of paper, too, these pitiable authors. Trees probably weren’t as expensive back then, but still. I couldn’t have put up with it. I wouldn’t have done it.

But before long a real smart guy invented the word processor. And then an even smarter, hoodwinker kind of guy, created the three R’s. Stories were everywhere, and so were
computers. The sun began to shine. Dashing off a tale became fun.

This is why I write. I enjoy it. And as much as everyone would love to believe in The Knowledge Holder, that it’s a story anchored in truth, it’s not. But then again, ever since I was a kid, I’ve been perfecting the art of equivocation.

Writer and cartoonist. https://hmargulies.com/
View all posts by hmargulies →
This entry was posted in Harry Margulies, Humor, Writing and tagged Harry Margulies. Bookmark the permalink.
%d bloggers like this: